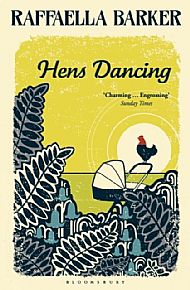 It will come as no surprise to my daughters and friends that yet again I am reading Hens Dancing by Raffaella Barker, my go-to feelgood book.The story follows Venetia Summers (newly single after her husband leaves her for his masseuse) via her diary entries over the course of a year. Charting her trials and tribulations of life with three children, assorted animals, nits, and builders and also the consolations of friends, her mad mother, pink shoes, visits to the Chelsea Flower Show and school concerts. This is not chick lit but an uplifting modern pastoral in the style of E M Delafield’s The Diary Of A Country Lady, a poignant and funny portrayal of when the country idyll goes awry. It also led me to discover the books of Venitia’s favourite writer, Georgette Heyer. In spite of their dated covers, these Austen-esque gems are packed with accurate historical detail and happy endings, which after all is exactly what we need right now. 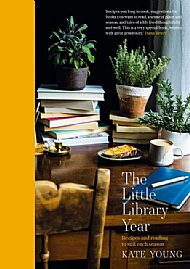 This is a beautiful book pairing seasonal eating with seasonal reading. Beginning with comfort food for January with wanton dumplings from The Joy Luck Club, gently rolling through the year with Easter lamb, summer picnics, tuck box fare and into autumn with spicy ginger bread then to the indulgences of Christmas with Pippi Longstocking’s Scandinavian feast then finally Isak Dinesen’s Babette’s Feast. Lovely quotes from masses of books inspire you to raid the bookshelves for Narnia, The Enchanted April, Cider With Rosie, Madame Bovary, Middlemarch and hundreds more. Stunning photographs throughout inspire reading and cooking for one or for a feast. Warm drinks and cocktails too. Delightful until on page 230 I came to a page headed The End of the world as we know it with this quote from Station Eleven by Emily St John Mandel:
“Jeevan moved quickly through the store…Another case of water- Jeevan was under the impression that one can never have too much-and then the cans and cans of food, all the tuna and beans and soup on the shelf, pasta, anything that looked like it might last a while.”
This brilliant dystopian book takes place during the Geogian flu outbreak. Other cheerful books in this section include The Road and Nineteen Eighty Four thankfully followed by a great store cupboard recipe for sardine, chilli and breadcrumb pasta, made it last night, delicious. 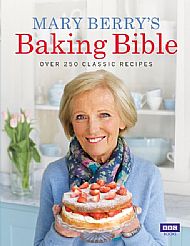 There are many cakes in literature, most famously Proust’s Madeleines and their opposite, Miss Haversham’s tragic, decayed wedding cake which Pip describes as ‘like a black fungus, I saw speckled-legged spiders with blotchy bodies running home to it, and running out from it’. There are jam tarts in Alice, chocolate cake in Matilda, Aunt Fanny’s baking is wolfed down on picnics by the Famous Five and a cake found in a tin saves the Swallows from the thought of starvation on Wild Cat Island.
This morning I found Liv had left her copy of Mary Berry’s Baking Bible on the kitchen table and a batch of flapjacks cooling, their oaty goodness cancelled out by sugar and golden syrup. This is the best baking book I have come across beautiful photographs and clear instructions, you can almost hear baking Queen Mary’s encouraging voice talking you through each step to perfect cake glory. Flicking through I found almost every cake ever created from Bishops Fingers (which turn out to be nothing more sinister than shortbread fingers coated with almonds) to the luscious American Wedding Cake will serve 100 people, ingredients include 3lbs 9oz of plain chocolate and 30 large eggs adding the flour, sugar, almonds etc I think it would need mixing in the kitchen sink and the mixture would not fit in any of my cake tins or oven. No spiders in sight on this one to make Pip squirm.  In these strange times with families at home let’s take a leaf out of Mary’s book and reinstate afternoon tea for a little comfort. Also leave a treat on friends and neighbours doorsteps to let them know they are not forgotten.

Children maybe finding being at home difficult, not understanding the current situation, missing their friends and family and in many cases not being able to enjoy outside space. Audiobooks might help. Not only a delight to listen to, audiobooks develop listening skills and encourage quiet concentration. They develop an appreciation of phrasing, help the child understand more complex language and increase vocabulary. Here is a small selection (for middle grade readers and above) that have stood the test of time and will be enjoyed by both adults and children.
Harry Potter ( J.K. Rowling) Stephen Fry on top form as all characters good and bad. A rule of thumb is that the readers age should be about that of Harry himself, the later books are very dark.
Just William ( Richmal Crompton) Read superbly by Martin Jarvis, the Leopard Hunter on cd 2 is pure comic genius.
Kidnapped ( Robert Louis Stevenson) a full cast dramatisation.
Winnie The Pooh ( A.A. Milne) a BBC dramatisation staring Judi Dench, Jane Horrocks, Geoffrey Palmer and Stephen Fry among others.
Wizard of Once ( Cressida Cowell) narrated by David Tennant who also reads the How To Train Your Dragon series.
Paddington ( Michael Bond) again read by Stephen Fry though some of the the original stories read by Michael Hordern are thankfully still available.
Wind In The Willows ( Kenneth Grahame) wonderful voices by Allan Bennett, a national treasure.
The Chronicles Of  Narnia ( C. S. Lewis) A full cast dramatisation of all seven stories including The Lion, The Witch And The Wardrobe.
Just So Stories (Rudyard Kipling) various readers including Tony Robinson.
Anything by Roald Dahl, Fantastic Mr Fox and Danny Champion Of The World are brilliant, narrators include Kate Winslet, Stephen Fry, is there no end to his talent, and Dahl himself.