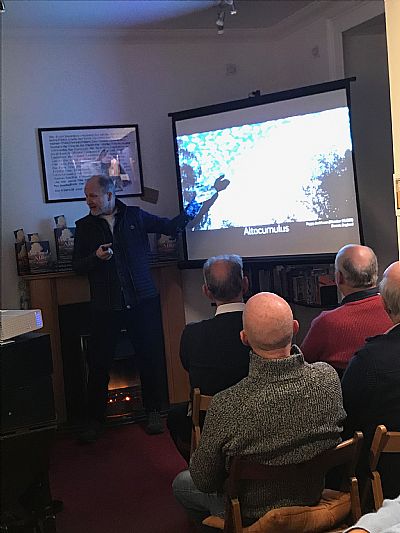 'Look up, marvel at the ephemeral beauty, and always remember to live life with your head in the clouds'

In this enlightening and thoroughly entertaining talk Gavin, founder of the Cloud Appreciation Society, took us on an illustrated tour of the sky and discussed his beautiful book A Cloud A Day. 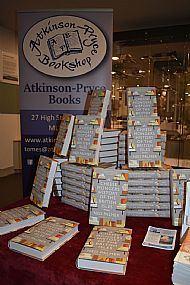 Ned took us on a journey through time as he talked about his book A Cheesemongers History of the British Isles, a fascinating cheese odyssey with delicious samples and refreshments, courtesy of The Olive Tree Deli.

"Ned Palmer teaches us that in fact, correctly understood, history is mainly about cheese" John Lanchester.

Legend of Scottish crime-writing Quintin joined us in the bookshop on publication day of his 31st Bob Skinner mystery.

What a great 10 days of events starting with Hang on A Tic...It's Just a Minute, based on the much loved BBC Radio 4 show, always laughter aplenty. This was followed by a fascinating discussion between Gerda Stevenson and Rosemary Goring about the incredible women throughout Scottish history.

Later in the week we enjoyed a scholarly panel of Professor Stephen Bann and Professor Alan Riach, chaired by Magnus Linklater discussing the complicated relationship between Hugh MacDiarmid and Ian Hamilton Finlay. All proceeds from this event were divided between the two charities Little Sparta and Brownsbank Cottage.

Lastly the amazing Morag Hood joined us in the Library for story-telling and illustration featuring I Am Bat and Brenda is a Sheep. 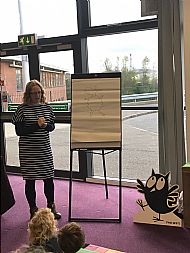 We were delighted to have Sandy McCall Smith visit Biggar for an afternoon tea with his many best-selling books including the latest No.1 Ladies Detective Agency 'To the Land of Long Lost Friends' and a brand new collection of short stories 'Pianos and Flowers' which is due out in November.

What an entertaining, engaging and hilarious afternoon that everyone thoroughly enjoyed. 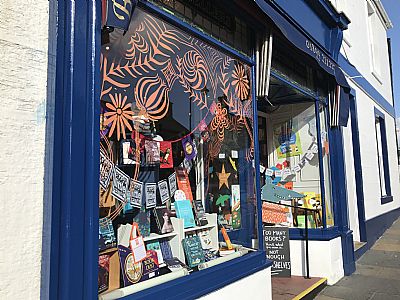 Thank you to everyone who joined on this special day to celebrate bookshops across the country.

Editor and Biggar local Anna Ludwig and some of the contibutors joined us in the shop for a launch of the book Music Therapy in Children and Young People's Palliative Care. A fascinating evening of talk, discussion and music. Thank you to everyone who came along to make it a memorable evening for all.

The book is now in stock.

Husband and wife team Chris Brookmyre and Marisa Haetzman, aka Ambrose Parry, joined us for a launch of their new book "The Art of Dying".

There's a fine line between kill and cure. Edinburgh, 1849. Despite Edinburgh being at the forefront of modern medicine, hordes of patients are dying all across the city, with doctors finding their remedies powerless.

But it is not just the deaths that dismay the esteemed Dr James Simpson. A whispering campaign seeks to blame him for the death of a patient in suspicious circumstances. Simpson's protege Will Raven and former housemaid Sarah Fisher are determined to clear their patron's name.

We are always delighted to run the pop-up bookshop at this fascinating festival of literature and thought!

A weekend-long event encompassing panel discussions and debates alongside a programme of music, visual and performing arts, film, spoken word, and well-being activities such as meditation, yoga, walks, and cycle rides.

For full information on this even visit their website.

Denzil Meyrick in conversation with Hugh Andrew in Biggar Library, 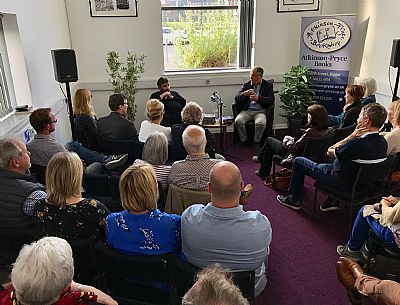 Scottish crime-writer extraordinaire Denzil Meyrick was in Biggar, in conversation with his publisher, Birlinn MD Hugh Andrew and promoting the latest DCI Daley thriller A Breath on Dying Embers.

When the luxury cruiser, hastily renamed Great Britain, berths in Kinloch harbour, the pressure is on DCI Jim Daley. One of the crew goes missing , and an elderly local ornithologist disappears. The arrival of a face from the past, sends Daley's world into a tailspin as he faces a life and death struggle, but is this his last throw of the dice?

Denzil has worked as a police officer, distillery manager, freelance journalist and company director.  He entertained us with his wit and mimickry on many subjects - including his books!   With thanks to both Denzil and Hugh Andrew for a most enjoyable and interesting evening.

Can you imagine a different Scotland, a Scotland where women are commemorated in statues and streets and buildings - even in the hills and valleys? This,Where are the Women: A Guide to an Imagined Scotland, is a guidebook to that alternative nation, where the cave on Staffa is named after Malvina rather than Fingal, and Arthur's Seat isn't Arthur's, it belongs to St Triduana.

A huge thank you to Sara for joining us in the bookshop and listening to her share how she re-drew the landscape, creating monuments for more than 1,000 women on sites across Scotland. Clever and complex with meticulous research, illustrative maps and an astounding imagination Sara has manouvered these women into Scotland's landscape today.

We were delighted to welcome Dr. Gregory Kenicer, Head of Education at Royal Botanic Gardens Edinburgh, to hear about his book Scottish Plant Lore: An Illustrated Flora.

Beautifully illustrated with the latest research and the social and natural history of plant lore this book shows us that there is far more to Scotland's plant life than might be imagined.

Scottish Plant Lore is a lavish new book devoted to the history of the folk uses of Scotland's flora down through the centuries. Illustrated with both period and contemporary botanical art as well as photographs from the RBGE Herbarium, it combines some of the latest research with a celebration of the rich social and natural history that has gone before.

The author of Grief is the Thing With Feathers and Lanny popped in to sign books, have a cuppa, a chat and a bit of cake.

The internationally anticipated Lanny was published in March to critical acclaim - chimerical, audacious, strange and wonderful - a song to difference and imagination, to friendship, youth and love.

It was a pleasure to meet Max and we hope he will return soon. Signed copies of both books in stock now.

A huge thank you to Richard for sharing his journey to Santiago de Compostela with us in 'Travels With A Stick'. A fascinating, inspiring and insighful evening.

This absorbing account reveals how the pilgrim journey can be nourishment for the human heart.
It connects us to landscape and brings us to the mystery of what it is to be human and vulnerable and open to the kindness of strangers and the gift of the new and the unexpected.

Kirsty returned to Biggar to launch the paperback of her latest book The Gloaming.

A bewitching tale of first love, shattering grief, and the dangerous magic that draws us home. Mara's island is one of stories and magic, but every story ends in the same way.

The Gloaming is a gorgeous tale of love and grief, and the gap between fairy tales and real life. It was a pleasure to welcome Kirsty back to the shop and hear about her work, including the fact that Mermaid Performer is a real job! 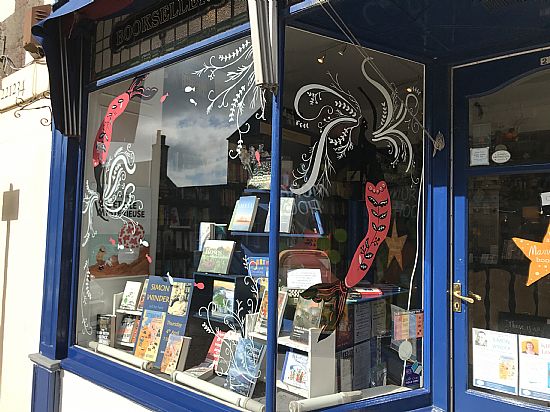 At the heart of western Europe lies a huge swath of land, stretching from the mud and fogs of the North Sea coast, all the way to the great barrier of the Alps.
Divided by their languages, religions and frontiers, everyone living there shares one thing: that they are inhabitants of a lost part of Europe - Lotharingia.

In this highly entertaining book Simon retraces how Lotharingia has brought forth many of Europe's greatest artists, inventors and thinkers, but it has also reduced many a would-be conqueror to helpless tears of rage and frustration. 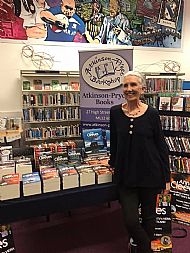 What an evening! The fabulous Ann Cleeves joined us in Biggar Library to discuss, with author and critic Lesley McDowell, the FINAL Shetland novel and eighth in the series, 'Wild fire'.

Signed copies of the whole Shetland series in stock now.

Remote. Drawn in by the reputation of the islands, a new English family move to the area, eager to give their autistic son a better life. But when a young nanny's body is found hanging in the barn of their home, rumours of her affair with the husband begin to spread like wild fire.

Perez is facing the most disturbing investigation of his career. Is he ready for what is to come?

We were thrilled to have Janice join us in the bookshop to celebrate the newly published collection 'Jellyfish'. Janice Galloway is an internationally acclaimed author of novels, short stories, poetry and non-fiction as well as collaborative works with sculptors, painters, musicians and photographers.

"Jellyfish is a timely reminder that she is one of the finest writers around. Each story, each sentence, is beautifully crafted by someone who cares enough to take such care..." Scots Whay Hae